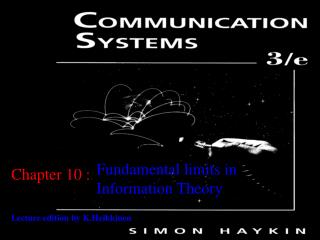 Chapter 10. Fundamental limits in Information Theory. Chapter 10 :. Lecture edition by K.Heikkinen. Chapter 10 goals. To understand limits of information theory To learn the meaning of entropy and channel capacity To understand coding theorems and their principles