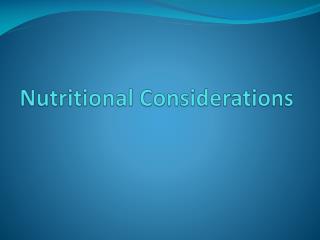 Nutritional Considerations. Introduction… . Research shows that, regardless of the sport, an athlete’s diet plays a critical, if not essential, role in performance. Yet misinformation and misconceptions persist among coaches and athletes regarding what constitutes an adequate diet. Nutritional management in COPD and the role of targeted nutrition - . copd and nutritional status. malnutrition in copd

IEP Considerations for the Child with a Cochlear Implant - . darcy beaver teacher of the deaf/hard of hearing. pragmatics