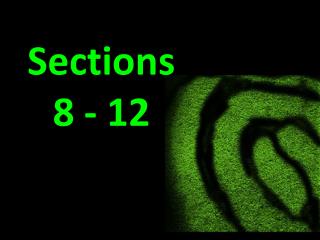 Chapter 8 Sections 1-4 - . by: kelsey garrison brittany ramsey. s eismology. the study of earthquakes. the scientists who

Chapter 12 Sections 1 &amp; 2 - . the effects of peace on the public • war leaves americans exhausted; debate over

Chapter 12 Sections 3 and 4 - . the new south and the end of reconstruction. why did planters have trouble finding people