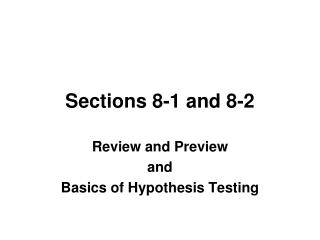 Sections 8-1 and 8-2. Review and Preview and Basics of Hypothesis Testing. HYPOTHESIS TESTING. In statistics, a hypothesis is a claim or statement about a property of a population. Space Figures and Cross Sections - Geometry lesson 11-1 (for help, go to lesson 1-3.) for each exercise, make a copy of

Android 20: Google Play for Education - . kirk scott. introduction. there are several sections of the android

Chapter 6, Process Synchronization, Overheads, Part 1 - . fully covering chapter 6 takes a lot of overheads. not all of

EOCT Study Guide - . eoct at a glance. all questions are multiple choice each section of the american literature eoct

Unit 4 Sections A.4-A.6 - . in which you will learn about: definition of pressure units of pressure applications of

General Arrangement Plan - . lesson 2. general arrangement plan. depicts the division and arrangement of the ship. side

Hybridization of Orbitals Sections 9.1 and 9.5 - . march 14, 2007. tetrahedral. experimentally we know the bond angles