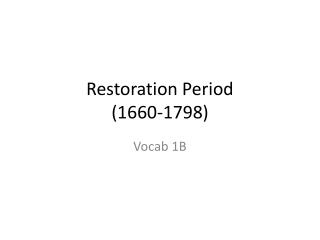 Restoration Period (1660-1798). Vocab 1B. 1. prodigious (adj). enormous or important (a prodigious event). 2. implacable (adj). i mpossible to appease or satisfy (The child’s fear was implacable, and he would not stop crying.). 3. rudiment (n). a basic principle or skill The Restoration - . do now. please take out your restoration skeletons from friday the 12 the restoration 1660-1798 you

The Restoration - . 1660-1798. charles i. previous religious tensions worsen when king james’ son, charles i, takes the

Restoration Period - . when did the renaissance period end and the restoration period begin? a number of dates could be

The Restoration and Enlightenment - . or, how the return of the monarchy paved the way for renewed learning and luxury as