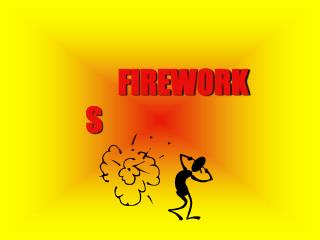 FIREWORKS. HISTORY. Writings from 850 AD show that the Chinese used black powder to create “fireworks”. People learned to encase black powder, making flares and missiles that would frighten invaders. By the 12th century fireworks had become a part of religious ceremonies and many celebrations. Fireworks! - . bright lights and big bangs!. everybody has been to the detroit fireworks! if you haven't your missing out

FIREWORKS - . by : noah webster. lets set off fire works. it will go with the bar-b- q ue theme

Fireworks - Be safe. fireworks. be safe!. every year, just before bonfire night, we are reminded about the firework code.

Fireworks - . nicholas 5 mrs.butzin. three additional facts . it can take up to two days to make a 20 min firework show.

Macromedia Fireworks - . introduction to fireworks. by: j.d. this is a preview of macromedia fireworks tm . here we will