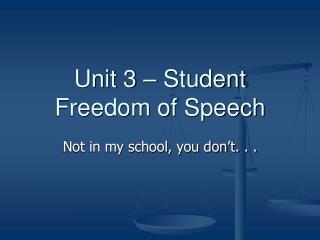 Unit 3 – Student Freedom of Speech. Not in my school, you don’t. Writing a Case Brief. Full Case Name (Court (unless U.S. Supreme Court) Year) (For – Against) Facts (Relevant facts only) Procedural History Question Asked (Yes or No) Holding (Response and Brief Why) (Justice) Reasoning