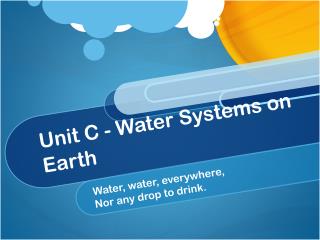 Unit C - Water Systems on Earth. Water, water, everywhere, Nor any drop to drink. Chapter 7-The Water Cycle. 7.1 – WATER IN OUR WORLD. Water Distribution. Water covers 71% of the Earth’s surface . Water Distribution. Most of Earth’s liquid water is salt water in the oceans. Water Systems on Earth - . chapter 1.1. water systems on earth distribution of water. water can be found just about

Water On Earth - . chapter 10, section 1. there are two types of water. can you name them?. fresh water salt water.

Water on Earth - S6e3. a explain that a large portion of the earth’s surface is water, consisting of oceans, rivers,

Water on Earth - . where is the water found on earth?. groundwater. groundwater is freshwater under earth’s surface.

Earth Ride: Water on Earth - . some people in poor regions like africa already have to walk very far each day to get

WATER UNIT SECTION C - . solutions. solubility – the amount of solute that will dissolve in a given amount of

Water on the Earth Notes - . earth science grade 8. the earth is the only planet in the solar system to be covered in

Water Stores on the Earth - . the hydrologic cycle. from precipitation to groundwater. infiltration.

Reproducing Earth Systems on Mars - . going to mars. the mars one mission. essential questions. what is required for