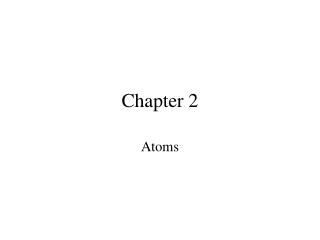 Chapter 2. Atoms. Atoms. Greek philosopher, Democritus fifth century B.C., coined term atom, as particles that can not be cut or broken up further. Law of Conservation of Mass. Antoine Lavosier- found when a reaction occurred in a closed system, total mass of system remained unchanged. .