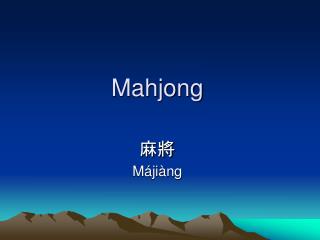 Mahjong - . game art design. history of mahjong. most historians estimate the age of mahjong at about 2,500 years old .

mahjong online free game - Mahjong exists for centuries and is derived from the asian countries. have fun with the free

Hong Kong Mahjong: Learning the Basics - . jan 7 2014. objective. to put together a hand that consists of 4 melds and a

Mahjong games, one of the best game to play online - It has been said that mahjong is one of the most played games of the