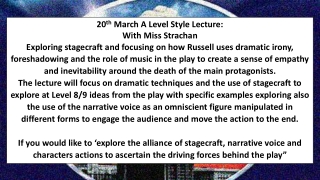 20 th March A Level Style Lecture: With Miss Strachan Exploring stagecraft and focusing on how Russell uses dramatic irony, foreshadowing and the role of music in the play to create a sense of empathy and inevitability around the death of the main protagonists. 6.1-6.3 Planetary Motion - . force fields. not the kind you find in star trek (the coolest show ever) force fields are

Astronomy: The Solar System and Beyond 5th edition - . michael seeds. the passions of astronomy are no less profound