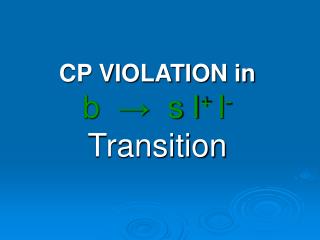 CP VIOLATION in b → s l + l - Transition. Direct CP-Violation . CP non-conservation shows up as a rate difference between two processes that are the CP conjugates of one-another. How can such a rate difference appear?. Renormalization and Lorentz violation - Damiano anselmi based on the papers arxiv:0707.2480 [hep-th] (prd), with m.

Supporting Early Childhood Transition: - . state of the evidence and implications for policy and practice. beth rous

Transition JCR Training July 2008 - . table of contents. there are two ways to create a transition jcr . you can open a

Epidemiologic Transition: Changes of fertility and mortality with modernization - . abdel omran. the epidemiologic