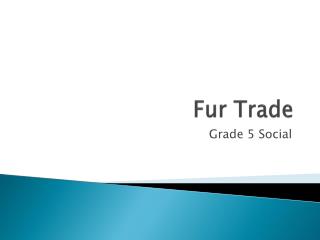 Fur Trade - By daniel g. davenport. fur trade. in this inquiry project my question is: would i have wanted to be a fur

The Fur Trade - . introduction. one of the earliest and most important industries in north america. began in 1500’s as

The Fur Trade - . the fight for the resources of canada. quick review. europe wants wealth and power = mercantilism ,

The Fur Trade - . essential question. how did the fur trade, european settlement, and the rise of the metis nation

The Northwest Fur Trade - . the companies. what were the four major fur trading companies that operated in the pacific

The Fur Trade Era - 1786-1846. the fur trade era. students will understand the economic and political impact of the fur

THE FUR TRADE ERA - . chapter 4 1770s-1849. european expansion. exploration and colonization by europeans began in the