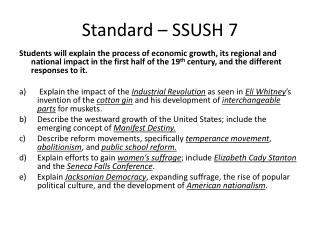 Standard – SSUSH 7. Students will explain the process of economic growth, its regional and national impact in the first half of the 19 th century, and the different responses to it. Standard Precautions - . standard precautions. list of guidelines used to prevent the spread of infection by law,

U.S. History EOCT test - . unit 9 preparation. ssush 21. ssush 21a. describe the baby boom and the impact as shown by

Standard Costs and the Balanced Scorecard - . chapter ten. standard costs. standards are benchmarks or “norms” for

The Undeniable Standard - Part 3 - - . are we reall y sure god intended for us to have an inspired , infallible ,

1. Globalization - . the linking of nations through trade , information, technologies, and communication . this often