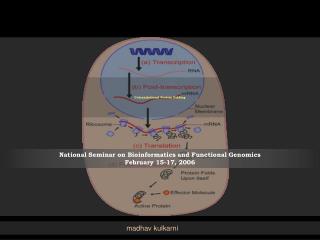 Cotranslational Protein Folding. National Seminar on Bioinformatics and Functional Genomics February 15-17, 2006. madhav kulkarni. The challenges of ‘Self Assembly’. Challenges in general living organisms put themselves together, all by themselves. Protein FOLDING - . proteins are composed of amino acids linked with peptide bond the way or sequence b y different amino

Protein folding - . the polypeptide chains that make up proteins have thousands of atoms and hence millions of possible

Protein Folding - Blake boling. tamara schneider. misfolding of proteins can cause a variety of diseases:.

PROTEIN FOLDING - . major question: precisely how is the one-dimensional sequence of a protein programmed to achieve a

Protein Folding - . by c. kohn, waterford, wi. review – central dogma of molecular biology. dna is copied by mrna in a

Protein Synthesis and Protein Folding - . remember proteins?. what are their monomers? amino acids – 20 to choose from