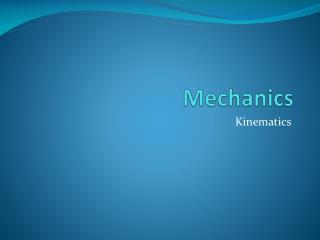 Mechanics. Kinematics. What is gravity? Where does it come from? What kinds of things have gravity? I have two masses. One is a basketball. The other is a 5lb bag of potatoes. If I hold them at the same height and drop them at the same time, which one hits the ground first?

MECHANICS - . motion. chapter 1 notes. what is a rate?. a rate tells how fast something happens. some rates that we will

Mechanics: - A branch of physics that is concerned with the motion and deformation of bodies in response to forces

Mechanics - . one of the most important fields in engineering. general areas. some courses at fiu. mechanical engineering

MECHANICS - . this project is done by: m.anitha (x std) under the guidance of: mr. k.v.rajesh . introduction. 1. stable

Mechanics - . الميكانيكا. introduction. mechanics: is the study of forces and their effects هي دراسة