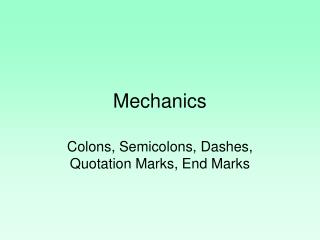 Range of Motion, Body Mechanics, Transfers &amp; Positioning - . rom is the extent of movement that a joint is

1. Review the principles of body mechanics - . define the following terms: alignment based on the word line ; a body is

2-umpire mechanics - . teams required for a baseball game. there are only two of you out there communication

BODY MECHANICS - . ms klutsey ellen e . sonam uhas. objectives. at the end of the presentation, students should be able

Quantum Mechanics and the Higgs Boson - . a history of modern physics from 1901 to next week. . computer generated

Mechanics Lien Acts - Much of the rhetoric around these laws is misleading. much of it is couched in terms of the need