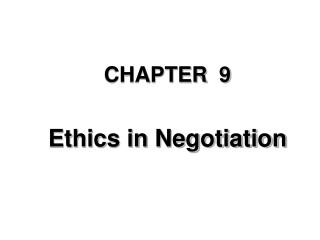 Ethics and Our Law - Lessons chapter 2 ethics and our law 2-1 what is ethics? 2-2 reasoning about right and wrong 2-3

CHAPTER XXXIII NEGOTIATION OF SHIPPING DOCUMENTS - . instructions for opening a letter of credit examination of a letter

Quantitative Methods PSY302 Quiz 6 Confidence Intervals - . 1. we can’t assume that the sample mean will equal the

Perception and Negotiation Chapter 5 - . by ciandra ross. the role of perception. negotiators approach each negotiation

Introduction to Business Ethics - . chapter iii . chapter objectives: . present the definition of ethics in general and

What Is Negotiation? - . basic generic human activity with widespread applications negotiation skill is essential to

Chapter 2 – Ethics and Our Law - . ethics. ethics – determining what is right or wrong action in a reasoned,

Ethics Plan: Scope - . ethics introduction, the purpose of ethics theories and approaches to ethics ethics and

Negotiation - . what is negotiation?. the process of two or more parties working together to arrive at a mutually

Chapter 9: Islamic Ethics - . introduction. some people said : &quot;ethics has to do with what my feelings tell me