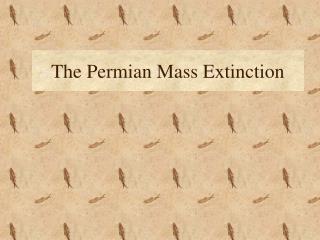 The Permian Mass Extinction. What causes extinctions?. Competition from other organisms Everything needs some space to live. If there isn’t enough habitat/food/etc, one species must adapt, move, or die out. Changes in the physical environment Climate change Animals must adapt or die out. Permian: The Mass Extinction - . by: carrie hager. table of contents:. the carboniferous period the rate of tectonics

The Permian Triassic Extinction Event - . the role of global warming in the ptee evelin collado and matthew moline.

Mass Extinction - . jacksury puerta. what is e xtinction ?. extinction is the process by which a species become extinct,

Anthropogenic Mass Extinction - . homo sapiens and the evolution of the biosphere since the pleistocene. kyle burchett

Permian-Triassic Extinction “The Mother of all Extinctions” - . anne kleinhenz. permian-triassic extinction. what was