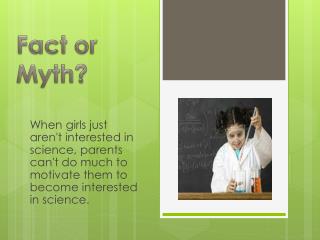 The Health Benefits of Drinking Tea… Fact or Fiction? - By: payton seelinger what is tea? camellia sinensis history of

Christianity Under the Siege of Neopaganism - . four myths evangelicals love . myth # 1: music is neutral and amoral

Detailed Fact-base: Post-Secondary Online Expansion in Florida - This report is being submitted to fulfill the

The Middle Ages: Myth and Reality - . the middle ages: the myth. we think of knights in shining armor, lavish banquets,

Myth Medicines from a drugstore can’t harm you. - Fact medicines can be just as dangerous as “street drugs” if they