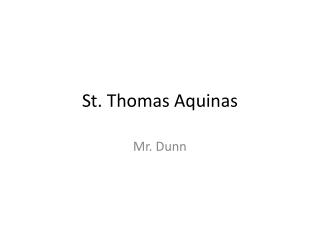 St. Thomas Aquinas. Mr. Dunn. Basic facts about Thomistic philosophy. Integration of Aristotle with Christianity Natural Theology, which is the use of reason to articulate truths of revelation (the Bible and the Church) Everything is ordered in a hierarchy with God at the top.