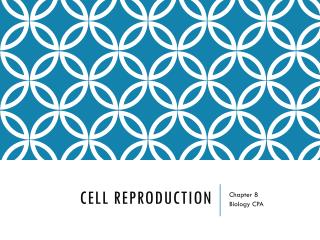 Cell Reproduction - . cells. your body is made of between 10 to 100 trillion cells about one thousandth of them die every

CELL REPRODUCTION - . unit target: observe how the structure and function of organisms change as they grow and develop.

CELL REPRODUCTION - . chromosomes. lesson objectives. describe the coiled structure of chromosomes made of dna and

Cell Cycle and Cellular Reproduction - . mader -chapter 9… and some extra stuff. essential knowledge 3.a.2: in

Cell Division - . the answers to all of these questions link into cell division! cell division allows for reproduction