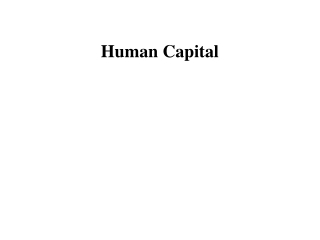 Human Capital - . basic skills . “uses a combination of techniques to read, listen to, and analyze complex

Human Capital - . in economics we talk about the 4 basic resource groups land, labor, capital (things made to make other

Human Capital Investment - - . the process of increasing the household’s holdings of human wealth either by engaging in

THE HUMAN CAPITAL - The economy of well being. the human capital. project. will accelerate more and better