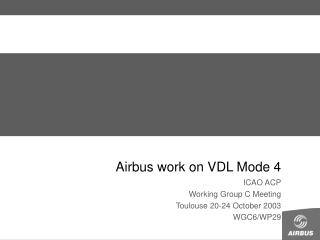 AIRBUS - . a330 flight deck and systems briefing for pilots this brochure is provided for information purposes only and

Airbus survey - . research experiment for the project „perception of quality of cabin components“. you will have to

AIRBUS INDUSTRIE - . by a bhattacharya. airbus industrie. genesis airbus was established in 1970 as a european