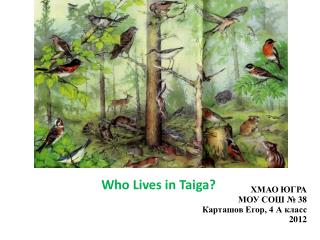 The Taiga Biome - By chubby monkey. the taiga biome. the taiga is the largest biome in the world. it stretches over 5300

The Tundra (and Taiga) Biome - Tundra: a treeless area between the icecap and the tree line of arctic regions, having a

Taiga - . also called the boreal forest is a region of coniferous forest extending across much of northern europe, asia,

taiga - . holly e mel. globally important . apart from the fact that a taiga biome is home to several plants and animals,

#213 Because He Lives God sent His Son, they called Him Jesus, - He came to love, heal, and forgive; he lived and died

Surviving In The TAIGA - . by michael nejaime &amp; bailee

The Taiga Plant Life - . by: robert smith. environmental factors. there isn’t much sun in the taiga- not much variety

The Taiga Biome - . by: jenn latulippe, tessie koulis, and brooke