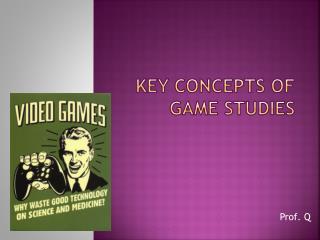 Key Concepts of Game Studies. Prof. Q. Before we start…. Take out your smartphone / tablet and download a free game from the marketplace, or use your laptop to go to Newgrounds or another free flash games site. Topics. Game Mechanics Narrative (briefly) Ludos vs. Narrative Key Concepts of Media Studies - . media forms and conventions. form. form can be explained in relation to the shape or

Media Studies: Key Concepts - . we are learning to: understand the relationship between the sign and signified. interpret

Key Concepts in Cyberculture Studies - . the question of jargon. david silver’s three phases of cyberstudies. i.

Overview of Key Concepts - . good to great and the social sectors by jim collins. the “good to great” formula. four