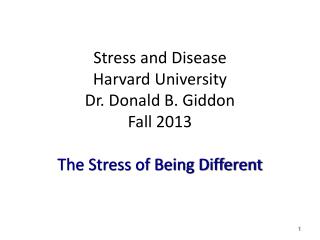 Stress and Disease Harvard University Dr. Donald B. Giddon Fall 2013 The Stress of Being Different. Key Concepts. The psychological and physical bases of perception are known Now, look at how they apply to being “different” as a stressor Self vs. other perception Face vs. body