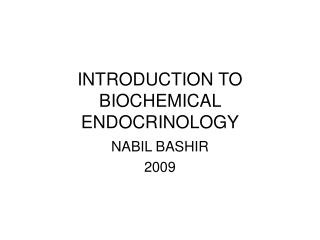 Introduction to Bioreactors - . biochemical reactor. a device in which living cells or enzyme systems are used to promote

Our last seminar!!! Chapter 19 Endocrinology - . review of errors. endocrinology a subspecialty of internal medicine the

Endocrinology - . calcium. an otherwise healthy 6-week infant presents with a generalized seizure. she is exclusively

Biochemical markers for the prediction of preterm birth - . american journal of obstetrics and gynecology 2005 may,