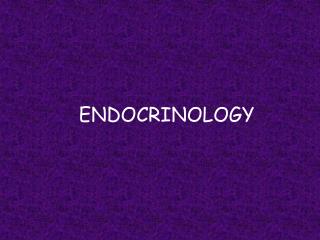 Animal Science 434 Reproductive Physiology - . lecture 6 and 7: endocrinology. what is the function of the endocrine

Biochemistry - . the study of the chemical substances and processes that occur in plants, animals, and microorganisms.

Back to Basics: Endocrinology Diabetes, Obesity and Thyroid - . diagnosis of diabetes. what are the cda criteria for the