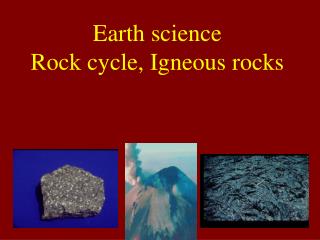 Earth science Rock cycle, Igneous rocks. 6.1 The Rock Cycle. Rock- a group of minerals bound together in some way Can consist of one mineral, but usually multiple minerals Rocks form from other rocks This relationship is seen in the rock cycle (p 119). Types of Rocks. The Rock Cycle Igneous Rocks Volcanoes - . earth and space science. the rock cycle- minerals form rocks all rocks can be

IGNEOUS ROCKS AND THE ROCK CYCLE - . intrusive igneous rock. formed under the surface of the earth formed from cooling

Earth Rocks 1: Igneous Environments - Earth rocks 1: igneous environments. atoms. so far, we have looked at the

Rocks and Rock Cycle - . rocks. a rock is a mixture of two of more minerals- a mixture is a physical intermingling of

Rocks and Rock Cycle - . mrs. reese. do rocks change over