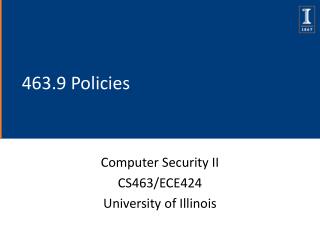 463.9 Access Control Mechanisms - . uiuc cs463 computer security. based on slides provided by matt bishop for use with

Policies - . policies and decisions. in order to act effectively in the real world, we have to make decisions. knowing

Security Policies - . security policies describe how a secure system should behave generally, if you don’t have a

Terminology Policies - . international research and activities. 20 minutes to tell you about:. the difference : language

Use Policies - . deputy attorney general robert morgester robert.morgester@doj.ca.gov. use policy. communicating the use