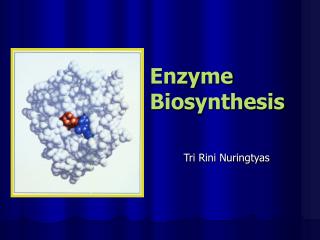 Enzyme Biosynthesis. Tri Rini Nuringtyas. As we remember ! Most enzymes are proteins so Mechanism of enzyme synthesis is no different from protein synthesis in general The information which determines the primary sequence of an enzyme is contained in the order of DNA sequence. * Lipid Biosynthesis - - these are endergonic and reductive reactions, use atp as source of energy and reduced

* Lipid Biosynthesis - - these are endergonic and reductive reactions, use atp as source of energy and reduced electron

CARBOHYDRATE BIOSYNTHESIS - Bc368. biochemistry of the cell ii. carbohydrate biosynthesis. april 15, 2014. anabolism vs.

Lipid Biosynthesis - . c483 spring 2013. which of these is not a difference between fatty acid synthesis and beta

Protein Biosynthesis - . away from the ribosome genetic code charging trna ribosomes on the

Cholesterol biosynthesis - . location of pathway the pathway is located in the cytosol, beginning with acetyl-coa. most