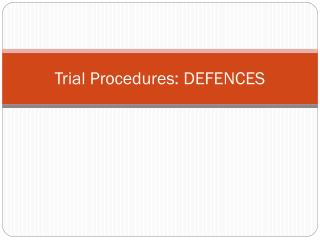 Trial Procedures: DEFENCES. AUTOMATISM. Act must be voluntary in order to be criminal Acts committed in an unconscious state are not voluntary Therefore the argument is what degree of consciousness is required to commit a voluntary, thus criminal, act Decision Procedures for Linear Arithmetic - . presented by omer katz 01/04/14. based on slides by ofer strichman. agenda.