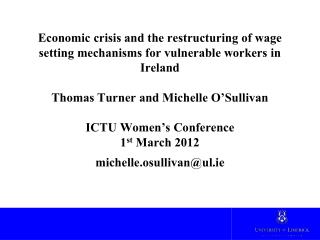 The Life and Ministry of Alexander Campbell in Historic Bethany - . early life. alexander was born sept. 12, 1788, in a

The Crisis, No. 1 - . thomas paine. literary analysis. persuasion writing meant to convince readers to think or act in a

How the Crisis Has Changed the Economic Policy Paradigm - . scott t. fullwiler james a. leach chair in banking and

The Jazz Age - Chapter 14. the jazz age. prosperity and productivity. after recovering from demobilization, the economy

Vulnerable Populations - . module one: . objectives. students will: name 2 populations considered to be vulnerable