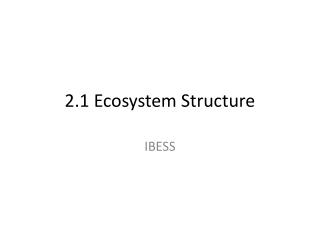 2.1 Ecosystem Structure. IBESS. Food chain in a Taiga forest. Secondary consumer. Primary consumer. Producer. What would you call the trophic level of something that ate the lynx?. Sun. Ringed seal. Baltic cod. Sprat. Ecosystem Structure - . passing of energy. all energy starts from the sun photosynthetic plants convert energy from the

2.1 Atoms and Their Structure - . objective relate historic experiments to the development of the modern model of the

2.1 Atoms and Their Structure - . objective relate historic experiments to the development of the modern model of the

2.2.2.1 Structure of an Ecosystem - . ecosystems. a community of interdependent organisms and the physical environment

2.1 A Background to Cell Structure - . cell theory. 1. all known living things are made up of cells. 2. the cell is

Chapter 24 Ecosystem Structure and Function - . 2. “the human brain now holds the key to our future. we have to recall

Chapter 4: Ecosystem Structure and Function - . ecosystems. study of how organisms interact with each other and with the

Section 2.1 The Structure of the Atom - . in this section… the components of an atom atomic symbols isotopes and atomic

Atomic Structure: The Nucleus Chemical idea 2.1 - . learning objectives describe structure of atoms explain and use the

2.1 The Structure &amp; Functions of Eukaryotic Cells - . endoplasmic reticulum. moves substances between the

2.1 - . solution of linear systems by the echelon