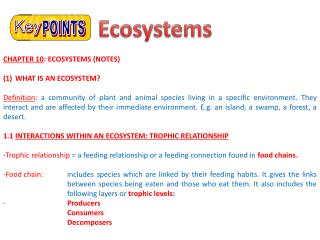 Key. POINTS. Ecosystems. CHAPTER 10 : ECOSYSTEMS (NOTES) WHAT IS AN ECOSYSTEM? Definition : a community of plant and animal species living in a specific environment. They interact and are affected by their immediate environment. E.g. an island, a swamp, a forest, a desert.