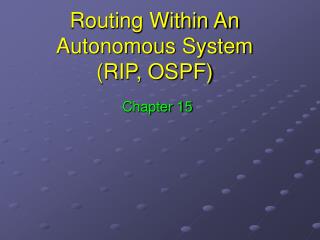 Routing Within An Autonomous System (RIP, OSPF). Chapter 15. Static vs Dynamic Interior Routes. Interior Routers Two routers within an autonomous system Are considered to be interior to one another How do they learn about their own networks? Small, slowly changing systems