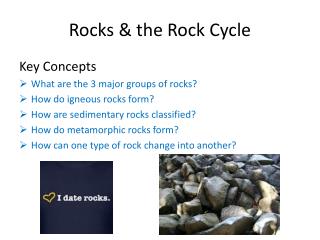 Rocks & the Rock Cycle. Key Concepts What are the 3 major groups of rocks? How do igneous rocks form? How are sedimentary rocks classified? How do metamorphic rocks form? How can one type of rock change into another?. Every rock has a story to tell…. We pass by rocks every day…. Nitrogen Cycle - . definition: n itrogen cycle . the nitrogen cycle is the biogeochemical cycle that describes the

Chapter 13: Mass Wasting - . introduction: what is mass wasting? (1). mass wasting is the downslope movement of regolith