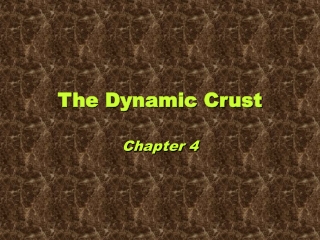 The Dynamic Crust. Chapter 4. Crust. The crust is the solid outer rock zone of Earth. The crust is undergoing constant change. Weathering and erosion Volcanoes Earthquakes Tectonics is the study of the movement of the Earth’s crust. Tectonic Plates. Solid and Liquid Zones. The Dynamic Crust - . regents earth science. seismic waves and earth’s structure. how can we tell that the outer core

Dynamic Crust - . theory of continental drift. (alfred wegener 1915 ). i pangea- a large landmass containing all of the

The Crust - . solid layer of rock that forms earth’s outer skin, including the solid earth and oceans. continental

The Earth’s Crust - . plates. the earth’s crust is broken into several large slabs of rock called plates each plate

Crust - . earth's outer layer; includes the rock of the ocean floor and large areas of land. mantle. the thickest layer

Crust - . outermost layer or shell of the earth crust represents less than 0.1% of the earth's total volume. mantle. the

Deformation of the Crust - . by: mrs. severe earth science. section 1 – how the crust is deformed. objectives: predict

Shaping the Earth’s Crust - . weathering and erosion. shaping the earth’s crust. the rocks and soil of the earth’s

The Mechanics of the crust - . how do rocks deform in the crust ? mechanisms bearing strength must consider: brittle

Deforming the Earth's Crust - . deformation. stress-the amount of force per unit area on a given material deformation-the