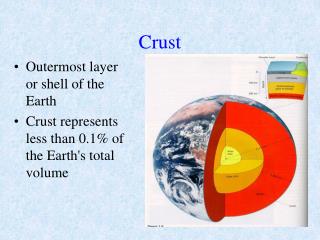 Crust. Outermost layer or shell of the Earth Crust represents less than 0.1% of the Earth's total volume. Mantle. The zone of the Earth below the crust and above the core Divided into the upper mantle and the lower mantle, with a transition zone between. Lithosphere. Crust - . earth's outer layer; includes the rock of the ocean floor and large areas of land. mantle. the thickest layer

Earth’s Crust - . by amy calleja. earth is made up of many different rocks. there is the crust, the mantle, the outer

Dynamic Crust - . theory of continental drift. (alfred wegener 1915 ). i pangea- a large landmass containing all of the

The Crust - . solid layer of rock that forms earth’s outer skin, including the solid earth and oceans. continental

Earth’s Crust - . unit notes. layers of the earth. crust. the crust is the layer that we live on it is the most widely

Reshaping Earth’s Crust - . the following changes may occur because the plates are still moving. 1. new smaller

The Dynamic Crust - . regents earth science. seismic waves and earth’s structure. how can we tell that the outer core