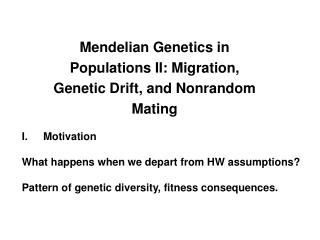 Mendelian Genetics in Populations II: Migration, Genetic Drift, and Nonrandom Mating. Motivation What happens when we depart from HW assumptions? Pattern of genetic diversity, fitness consequences. II. Migration. Also among islands, or between populations on the mainland, etc. SCIENCE 10 LIFE SCIENCE: GENETICS - .  genome british columbia, 2004 www.genomicseducation.ca. i. how does the

Genetics - . reproduction review (not in genetics notes) genetic information is passed on through the process of

SpongeBob Genetics 1 &amp; 2 - . to be used with http://sciencespot.net/pages/classbio.html#anchor-genetics.