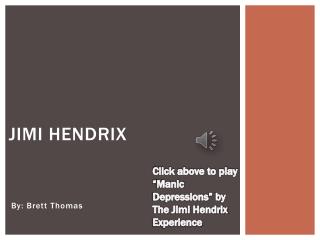 Jimi Hendrix - . by ian auerbach 4/3/12. about jimi. jimi hendrix is widely considered the greatest guitarist that ever

Jimi Hendrix - . the greatest guitarist that ever

Jimi Hendrix Psychedelic Art - Jimi hendrix artworks can be used as a part of your home decor. also his t-shirts are

Jimi Hendrix at Woodstock - . caroline kenny. “something was tapped, a nerve, in this country, and everybody just

Tuesday, September 18 th RIP JIMI HENDRIX - . please place your paragraph on the stool. take a copy of the scarlet letter

Jimi - . hendrix. facts . was unable to read or write music. an entirely self taught musician. gained attention at

From the last lesson: Ducks, Jimi Hendrix and Knowledge Questions - . open-ended questions that admit more than one

Jimmy Hendrix - . by brandon cartwright. jimmy hendrix documentary . this is a documentary about the late musician jimmy