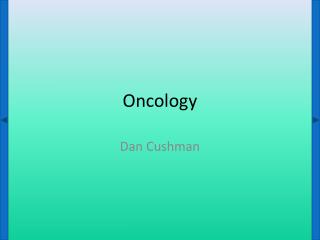 Oncology. Dan Cushman. Cancer. No presence detected by any currently available studies. What is “complete remission?”. Decrease in tumor size by 50%. What is “partial remission?”. Obtain a piece of the tumor (not the whole thing). What is an incisional biopsy?. Lung, breast, colon. Oncology - . cancer. more than 100 forms of the disease almost all tissues can spawn cancer and some tissues can