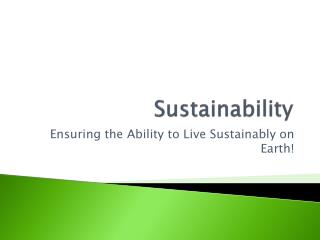 Managing the Project Implementation, Ensuring Sustainability Principals Meeting - . to get a full understanding of t he

Sustainability, Part 2 So what do we do now? - . dr. ron lembke. what is “sustainability?”. the ability to keep doing

Sustainability: Fighting for our Future - . abby cocke, baltimore office of sustainability. what the heck is

Institutional Sustainability Assessment (ISA) - . prepared for the association of college and university registrars and

Business Sustainability “Greening the Corporation” - . will o’brien december 2009. &quot;what we take for

Sustainability and the Environment - . a global and personal perspective. the sustainability triangle . social equity .