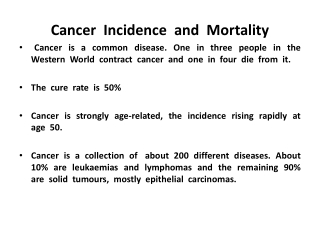 Cancer Incidence and Mortality.  Cancer is a common disease. One in three people in the Western World contract cancer and one in four die from it. The cure rate is 50% Cancer is strongly age-related, the incidence rising rapidly at age 50. Cervical Cancer: Opportunities and challenges for decreasing incidence and mortality

Prostate Cancer in Iowa: Incidence, Late-Stage Incidence, and Mortality 1999 to 2009 - . these maps were produced by the

Profile of Cervical Cancer in England: Incidence, Mortality and Survival 2011 (February) - . trends in incidence and

Profile of Cervical Cancer in England: Incidence, Mortality and Survival 2012 (October) - . trends in incidence and

Incidence of Childhood Cancer - . what is cancer ? uncontrolled growth of cells are these cancer cells abnormal? no, but