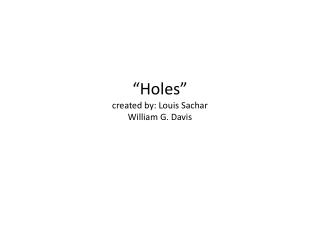 Black Holes - . gregory r. sivakoff university of virginia. black holes. what is a black hole? how do we know black holes

Book Talk by Chris Norell - . holes - introduction. have you ever been accused of something you didn’t do? this is a

HOLES - . author louis sacher by: tre’juan walker. there is the warden mr.sir mr.pendancekey ,and the kids. there is

Chapter 13 Black Holes - . what do you think?. are black holes just holes in space? what is at the surface of a black