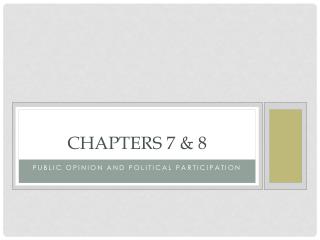 Chapters 7 & 8. Public opinion and political participation. What is public opinion?. A collection of the shared attitudes of many different people in matters relating to politics, public issues, or the making of public policy. The Giver – Chapters 1 &amp; 2 - . 1. why might the arrival of a jet be a terrifying experience for the entire

Ruby Quest: Chapters 30-31 - . filbert emerges from the large tube, wielding a bonesaw. he demands that ruby and tom,

LEVEL 1 CHAPTERS 1 &amp; 2 - . this class is full. i can’t add any more students. due to insurance policies, the

Chapters 7&amp;8 Newton’s 3 rd Law &amp; Momentum - . conceptual physics. for every force, there is an equal

Chapters 4 B - . statement of cash flows. objectives of this chapter. i. identify business activities which can generate