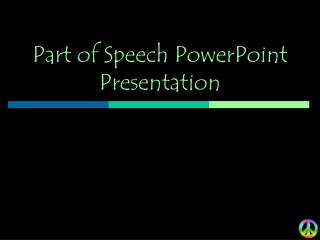 Part of Speech PowerPoint Presentation. Nouns. - Definition: A word or word group that is used to name a person, place, thing, or an idea. - Examples: Teacher, Disney World, Rope, and book. Common and Proper Nouns. PowerPoint Presentation - . as shared by chelonnda seroyer in “using the first days of school ”. the information

How to use PowerPoint effectively - . g.s. betney (2011). today’s workshop. what is powerpoint? designing powerpoint

Welcome To Pastor Garry Clark’s PowerPoint presentation from the May 28 th sermon: - The secret to a lasting love.

8 Parts of Speech - . 9th grade english by: melissa rosloniec. learning objective. in this lesson, we will be learning