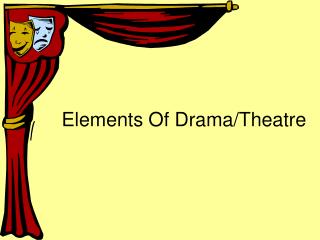 THE BIG BIG DRAMA QUIZ SEE IF YOU CAN REMEMBER THE DEFINITION FOR THE DRAMA TERMS… - . part 1: drama forms. play

A Brief History of the Elements - . element. any pure substance that is made of only one kind of atom. history of

DRAMA - . history of western drama. drama. fiction in performance a prose or verse composition intended for

Theatre through the Ages - . greek theatre had a religious significance and an offering was always made to the gods

Tables - . learn to create and enhance tables using a variety of attributes and formats. tables. tables allow you to

Aristotelian Elements of Drama - Source. the poetics ? b/w 335-323 bca documentation of early forms of drama and the

Craft Lesson: Structure and Elements of Drama - . history of drama… . drama was developed more than 2,500 years ago.