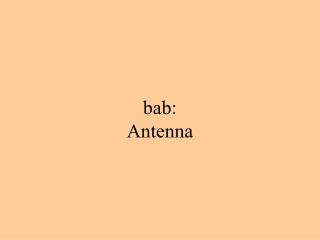 Antenna Fundamentals - . lecture 4. objectives. list some of the characteristics of rf antenna transmissions describe the

Antenna Basics - The tv channels hertz (hz) means cycles per second . (heinrich hertz was the first to build a radio

SATELLITE ANTENNA - . by, s.subhashini v.pratheeba. satellite. a satellite is an artificial object which has been

Antenna Booster - . what is antenna booster?. a device used to amplify the signal received (by ratio) by the antenna